A How To Hit A Driver. Success Story You’ll Never Believe

Often termed as the hardest shot as it opens into the game, tee shot or a drive has all chances of going wrong than becoming a winning entry shot into the green. When you are the center of attraction for the spectators as well as your competitors, it is not a surprise that you get on your nerves. A near to perfect beginning to go miles into the golf game, is what you can define for the importance of a driver shot in golf. The following article is a beginner’s guide on how to hit a driver.

How Long Can The Drive Go And How?​

If you are a professional golfer, you may be able to hit the ball as far as 300 yards on an average, with the best players going up to 350 yards. US-born Mike Austin born in 1910 holds the world record recognized by Guinness Records to hit the longest drive of 515 yards (471 m) in the year 1974 in one of his competitions at the US Senior National Open Qualifier with a 43.5" steel shafted persimmon wood driver.​

A driver is one of the most difficult golf clubs to play with, particularly when you start the game. Have a close look at the driver specifications and select the one giving you the best grip, loft, shaft length and confidence. Well, your budget also matters, so do your trainer’s advice. Give below is a link to an easy-to-understand video explaining the specifications to look for in the driver.​

HOW TO PICK A DRIVER | WHAT ARE YOUR BEST SPECS? (SOURCE: YOUTUBE.COM)

This article will be summarizing on the following improvisation methods of the tee shot:

Technique improvements are mainly regarding ball position, swing characteristics, backspin, loft, consistency and accuracy, sweeping, and timing. Mental preparedness is about targeting the focus and making quick decisions in shot selection. Playing tips to get a good shot off the f﻿﻿a﻿irway have also been listing including that for position, posture, and swing. Tips to avoid some common faulty shots while attempting to get a good driver are also included.

Techniques to hit a driver: It is a mix of both mind and body

The driver shot is played from the tee box with the intention of moving the ball over a long distance down the fairway. Position the ball to suit your playing style. For example, if you are a right-hand swinger, place the ball corresponding to the left heel to give more lift to the ball if the club head contacts the ball when it starts to ascend. Make your loft of the clubhead face higher, approximately somewhere near to 10-12 degrees, since it increases the height of the drive and also reduces the curve, making your shot smooth and straighter.

Your mind too has a great role to play. As popularly considered keeping the starting troubles of anxiety and unwanted focus on the hazards away will help your focus on improving your techniques and maintain your presence of mind in the game. Remain calm and work on the three main factors powerful enough to determine your drive distance, which is technique, flexibility and body posture. If a player is more flexible, he will be able to play a longer drive by widening the arc of the club swing, thereby creating more thrust and transferring the force to the ball upon impact.

The aim of the driver shot in standard golf games is to achieve the most holes in one on par 4s, and beyond that for the longer drives with respect to the display of more skills of the player. Holes in one is the shortest distance in the game for the ball to fall into the maximum number of holes. This is, in most cases, however, achieved on par 3 for the majority of games, with more holes achieved with irons instead of drivers. More than the speed of hitting the ball, consistency of being able to hit the ball matters more in getting the best drive. You can try swinging at the highest speed possible, but try to find out which speed gives you the maximum hits. Practice with it, and eventually, you may even be able to improve your speed with no compromise on accuracy. Take care of the following things to improve your technique:

Take time to practice swings like half swings and full swings after choosing the target and shot. Set your posture with the legs and hands along with the clubface which gives you the confidence to swing. Use the center of the clubface to hit the ball squarely and flat. This will make your drive longer and straighter.

Balance your weight between your trunk and lower part:​ Be composed and set your weight comfortably on your legs without any kind of over straining. Taking greater hip turns may make your swings unnecessarily long instead of getting a controlled shot. When the length and balance go uncontrolled, striking consistency goes for a toss. Making the spin out move should be avoided and rotate the trunk in sync with the lower body.​ Anchor your back leg and go for a stable swing without swaying. This will help in being consistent and also get a good strike.​

Focus on your target:​

Don’t just swing your driver only with the aim of covering a long distance. Take time to focus on a target instead like a tree or fairway bunker, not limiting to the fairway and drive the ball to hit the target.

Keep your body’s center of gravity near the middle of stance when you do a backswing and move it towards the target during the downswing. Avoid putting more weight on the back foot during backswing to prevent loosing accuracy and power to maximize distance.

Timing for striking the ball:​ Make a compact swing every time you strike the ball instead of taking the club back to longer distances for the following strikes.

Play of the wrists: For an accurate drive, keep the wrists firm without too much flicking. The timing of the strike is important so do the coordination in movement of the arm and rotation.

Swing plane can be made vertical and flatter:​ Make the swing more vertical to get a steeper backswing. This will give more time and space to properly swing the club within the swing plane.

Give time to steady your position during backswing:​ 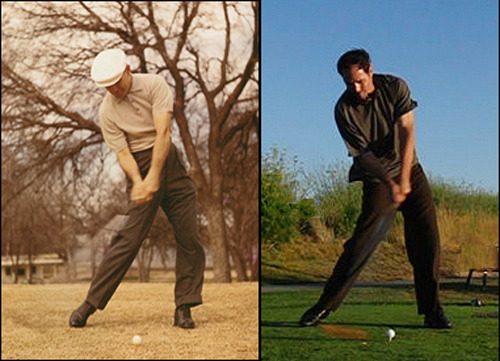 Before going to the downswing, give enough time for your body and the club to return to proper alignment. There should be a slight pause in movement at the back in order to gain force and momentum for the club to just come onto the slot for the perfect downswing.

Have a controlled backspin for a sweeping motion:​ 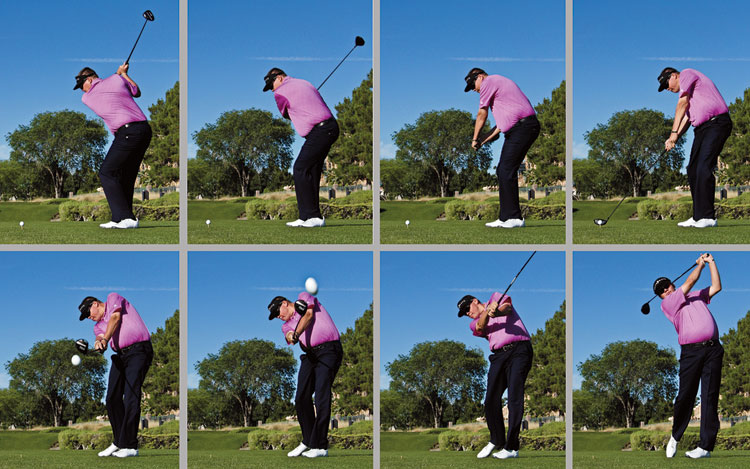 When iron shots are hit with a downward angle with the intention of striking the ball in full plane, the ball gets into a backspin which may be too high. This takes out the strength of the shot to cover a longer distance, and the ball may not reach the target. With sweeping motion off the tee suiting the driver design, the spin rate is controlled enough to give the ball a good flight.

Do not loose balance while swinging hard:

For covering more distance, you may give a hard swing giving your full energy and might end up losing your balance. If you reduce the force slightly below 100% to remain in balance, you will be able to do the next shot efficiently by making contact with the center plane of the club face when your swing is in the balance. Focus more on the consistency of shots rather than speed of the driver. Once you achieve this, you can start increasing the swing speed.​

Getting a good shot at the fairway; the driver off the deck

Make the less attempted fairway drive which is desperate to play with the driver being the toughest club for high and mid players simpler. Driver shot is more difficult when you have to give the full face to strike the ball sitting on the ground instead of tee, particularly with a large clubhead with most above 450cc.

How to avoid the embarrassment of hitting a skyball?

When you try to hit a drive for covering longer distance, with the force and the variation in the angle, you may be in for a shock to see your ball soar the sky, termed as skyball golf shot or a pop-up. When a shot is played off a tee, the ball shoots up high into the air and hits the ground covering only a shorter distance than expected. This usually happens when the top of the clubface strikes the ball instead of the center. Because of the impact, the driver club gets under the ball with the clubhead sliding under.​

What makes the technique go wrong for the driver becoming a pop-up?

Quick tips about the driver

If this article has helped in reducing your starting anxieties for the tee shot, please do not hesitate to share it with other anxious beginners.

7 Things You Should Not Do With Left Handed Golf Swings

Why You’re Failing at How Long Should 18 Holes

How Did We Get Here? The History of How To Stop The Golf Ball And Start Hitting The Stable Shots Told Through Tweets

The Best Kept Secrets About The Best Swing Speed

My name is Lydia Lim, and I am a proud mother of one beautiful boy called Jack. I’ve been blessed with a happy and fulfilling life, and I am as happy as I can be. My hubby is a passionate golfer, and he introduced me to the sport in September, 2014. Since that day, I fell in love at the first swing.

What Are You Looking For?